Along with an early warning notification email, the sensors will allow council officers to monitor rising water levels and alert the borough’s drainage contractors to respond quickly to any surface water flooding.

As part of the trial, the Council’s team will also analyse the data produced by the Aquasition flood monitoring system to generate long term insights that will help understand and predict the impact of flooding on the drainage system. The new sensors are part of the South London Partnership’s InnOvaTe Project.

The interactive map identifies any locations where there is risk of flooding, with a red warning indicating higher risk 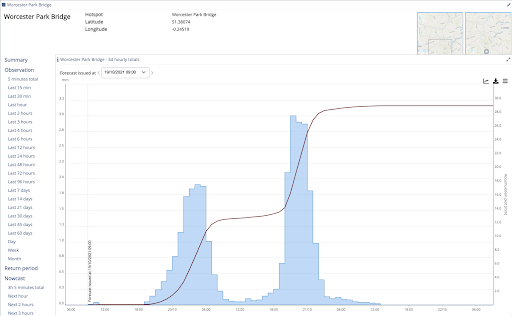 Officers then receive data which predicts the estimated amount of rainfall

Council officers have been working hard in response to the flooding which occurred in Worcester Park and other local areas. The summer saw heavy rain which directly impacted many residents across the borough, including in Worcester Park which was the most affected. Surface water from heavy rainfall damaged homes and businesses, disrupted transport, and caused upset for many, including some of our most vulnerable residents.

The Council’s Highways Team assists in reducing the risks of future flooding by reporting any blocked and silted over gullies noted during their statutory highway inspections to the Council’s Waste Management Team, who will then arrange for the cleaning to be carried out to help improve surface water drainage.

Any reports to the Highways Team on damaged gullies, broken pipework and grates will be raised for investigation and repair. These measures will allow water levels to subside faster during and after a heavy downpour.

The sensors have been installed in seven locations across Sutton and will be in operation at:

A full list of locations can be seen here.

The Leader of the Council, Councillor Ruth Dombey, met with Thames Water to ensure that they are clearing the gullies across the borough and are maintaining the water drainage systems.

“We know how distressing the flooding was for our residents.

“The Council has been working hard since to try to reduce the risk of any future flooding. Sadly, heavy rain and flooding will become more regular occurrences in the future due to climate change and we need what we can to get ready.

“Technology like these new sensors to notify council officers about rising water levels in advance so we can take steps to reduce the risk of flooding will help keep our local residents and businesses safe.”

Find out more about what Sutton Council is doing to reduce the risk of flooding in the borough.

About the InnOvaTe Project:

This initiative is funded by the Strategic Investment Pot (SIP) as part of the London Councils Business Rates Retention scheme which is administered by the City of London Corporation, and hopes to improve people’s lives through the delivery of a multi-purpose Internet of Things (IoT) platform, which will connect various sensors across borough boundaries.

The project is led by Sutton Council, which was selected to oversee the project on behalf of the other boroughs.